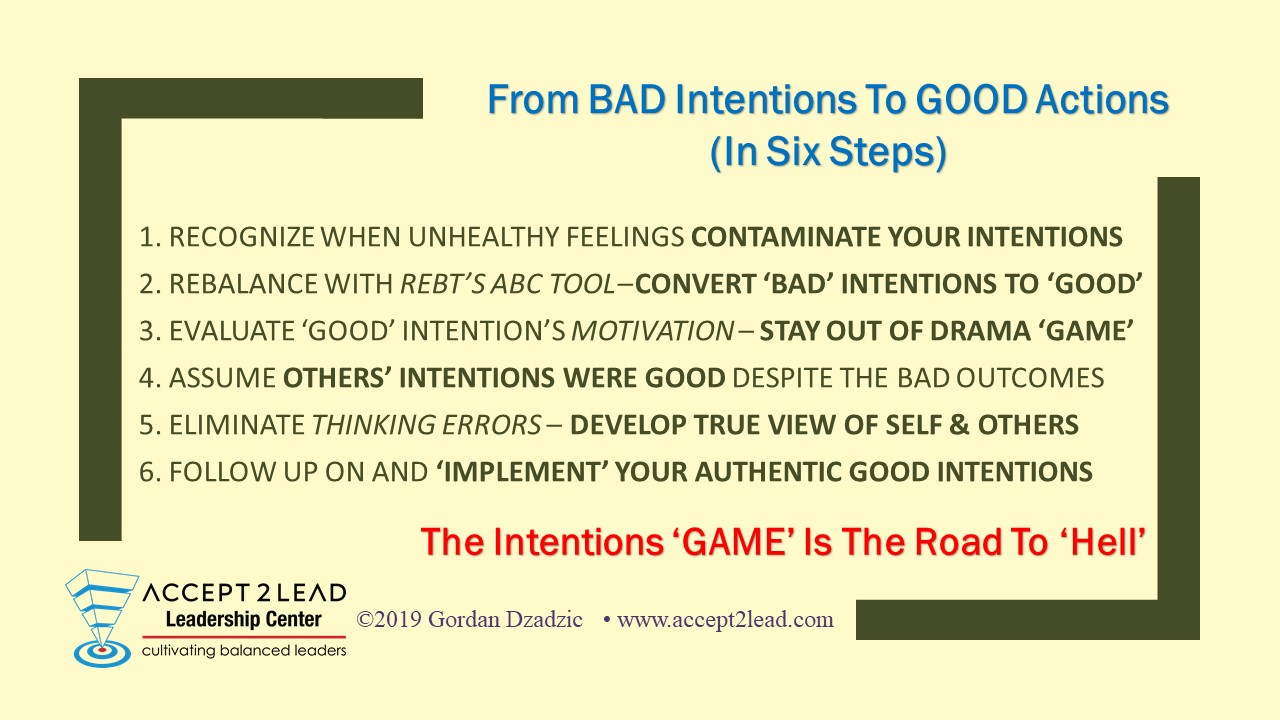 Proverbs often mislead by overgeneralizing complex matters, like saying “good intentions are the road to hell.” It’s bad intentions (and those that appear to be “good” but that mask unwholesome motivations), which lead to harmful outcomes. These six (6) steps aim to help you recognize and control your bad intentions, learn the human situation that stimulates good intentions, and act authentically within the positive realm.

1. Recognize when your intentions and resulting decisions and actions are contaminated by unhealthy feelings of anxiety, hurt, shame, envy, etc.

As per the Buddhist monk Ajahn Chandako, if your “intention is tainted by anger, selfish desire, a wish to harm or general confusion, this creates the causes to experience pain, unhappiness and misfortune in the future.” Your behavior will likely lead to distorted relations, possible retributions, and perhaps end with a passive surrender to this bad karma.

“[But] karma is not fate and in this dynamic interplay between experiencing results from the past and responding in the present, we literally create our own future, moment by moment. This [present moment] is where one has the opportunity to free oneself from the unbeneficial patterns of behavior based on one’s past conditioning. So when one finds oneself in an unpleasant situation, rather than projecting blame, one can reflect wisely on one’s own past conduct and take responsibility for the causes that led to the situation. [This insight] naturally leads to living an ethical, compassionate and wise life.”

Example: John feels unhealthy anger towards his manipulative colleague, Peter, who gained a promotion over him. Rather than mindfully contemplating how he could have positioned himself better, what skills he could have gained or improved upon, what connections he could have made, relationships he could have tapped, etc.; John daydreams of ‘payback’. This gives rise to bad intentions (action tendency): revenge by underperformance, withholding information, etc. As John implements his strategy, every stakeholder loses… but mostly himself.

Point two shows how one can free oneself from these damaging patterns of behavior.

2. Convert unhealthy into healthy feelings by using REBT’s ABC model. Then, from a more stable emotional perspective, evaluate whether your intentions and action tendencies are “bad” or “good”.

Rational Emotive Behavior Therapy (REBT) is, amongst other things, based on the stoic philosophy that: “Men are disturbed not by things, but by the view which they take of them.” (Epictetus).

The ABC model reflects that:

When facing Adversities (A), people who hold irrational, rigid and extreme Beliefs (B), about those adversities will experience disturbing Consequences (C), such as unhealthy emotions, self-sabotaging thoughts, and unconstructive behavior.

Developing a rational – flexible and non-extreme – philosophy will lead to healthier emotions, helpful thinking and constructive behavior. This improves logical reasoning, which in turn generates practical intentions and decisions. Unless you are a ‘paragon of all virtues’, for this to work you not only need to be familiar with the ABC technique, but also need to apply it for the next couple of years – 25 minutes per day.

Example: See the entire ABC example of the hypothetical case of John missing out on a promotion to his manipulative colleague Peter while still remaining calm and constructive by clicking here (enter email address to receive e-book).

Motivated by the desire to feel superior rather than be compassionate or constructive, many take the role of “Rescuers” by unmindfully insisting on protecting the “Victims” (those who do not help themselves despite being able to) from “evil” third parties – aka “Persecutors”. However, when the “Victim” rejects help or “needs” too much of it, the “Rescuer” switches to the role of “Persecutor” by criticizing or blaming the “Victim”. It is these (“Rescuer’s”) “good” intentions that lead to “hell” – conflicting relationships among people.

This tripartite drama-intense, role-switching is widespread both at work and home and is known as a Drama Triangle, and can also include Triangulation.  It comes in the form of gossip, manipulation, unwarranted assistance, distasteful jokes about others, and so on. Being fallible, it can often be difficult avoiding this “game”, but we can recognize the “bait” that will help make participation rarer and shorter.

Example:Using the ABC tool regarding his lost promotion, John was able to liberate himself from unhealthy emotions and obvious bad intentions, and continued on with good performance.  However, one of John’s new “good” intentions – to seek support through gossip – subtly disguises his harmful motivation to get back at Peter and the manager for the damage he feels he has suffered.  John thereby assumes two roles: That of “Victim” (from the standpoint of his interlocutors) and “Persecutor” (from the standpoint of the manager and the promoted colleague). Everybody loses, experiencing lower morale and division.

The next point provides a simple technique which helps avoid playing the drama “game”.

4. Assume others had good intentions, despite the negative outcome. This will help you see the positive characteristics in others, thereby increasing your understanding and strengthening constructive action.

“Actions and intentions do not always align. Introspection allows each of us to judge that our intentions were good despite the bad outcome – and so our view of self remains high. Lacking the insight of others’ intentions, we evaluate others unfavorably when evidencing their overt behavior. Hence, we unrealistically view ourselves positively and others negatively.” (Kruger, J., & Gilovich, T. (2004).

Given this tendency to appreciate ourselves and depreciate others based on our one-sided view of intentions, we should take the advice of the Buddhist monk and author, Bhante Henepola Gunaratana: “Try to understand others as best [you] can. If you remain patient in spite of provocation, you can avoid getting upset, and your understanding of the human situation will deepen.”

Example: Despite missing out on the promotion, John is calm and performs well; he has stopped spreading rumors and dramatizing the situation and has achieved balance. The next step for him is to assume that somehow his manager and the “manipulative” colleague (who has been promoted) had good intentions despite the outcome. In order to achieve this, John asks his manager to provide honest feedback on his promotion prospects. John learns that his manager perceived John’s actions as a threat (the manager ‘jumped to a conclusion’ – see point 5 on thinking errors). Hence, the manager promoted Peter as a form of “threat prevention”… not to actively harm John.

During lunch with Peter, John becomes convinced that, despite the occasional “elbow”, Peter has good intentions and wants to help John advance. Furthermore, John becomes aware of Peter’s principles, his previous experiences, and upbringing that tend to make Peter become manipulative in (what Peter perceives as) high-stake circumstances. The first realization provides John with some counter-balanced positive views of Peter; the latter realization uncovers the suffering in Peter’s life that has led to his harmful behavior.

As the old proverb goes, “to understand is to forgive.” When you truly understand “the human situation” you will naturally accept other people. But this understanding requires the capacity to perceive an incredible depth of human complexity. Almost everyone, however, incapacitates themselves by misinterpreting reality with, what Cognitive Behavioral Therapy (CBT) calls, “thinking errors”. This brings us to point 5.

5. Develop a realistic view of self, of others, and life by recognizing, challenging, and eliminating your cognitive distortions (thinking errors).

People do not realize they have erred because they treat unwarranted, untested, and empirically unconfirmed assumptions, guesses, and inferences as undeniable facts or laws of nature.

Examples of John’s unconfirmed assumptions and inferences (The A of ABC):

Thinking error: “Jumping to a Conclusion”. Just because someone else was promoted, doesn’t mean they rejected John. In reality, John didn’t know the reason he was not promoted until he achieved the emotional balance and self-control to ask his manager for feedback.

Thinking error: “The Should Statement”. People behave how they want, not how John wants them to behave.

Thinking errors: “Labeling” and “Disqualifying The Positive”. While Peter’s faults are his negative aspects, he obviously has many useful skills.

Thinking errors: “All-Or-Nothing” and “Fortune Telling”. There can be a myriad of positive, neutral, or unrelated reasons to why someone misses out on a promotion.

Note that cognitive distortions are not just negative, they are also often overly positive. The Positive Psychology Movement managed to overdo things in an effort to counter widespread pessimism. However realistic perceptions are a far healthier alternative to unrealistically positive assumptions.

6. Follow up on and “implement” your authentic good intentions with the necessary actions.

So what are good intentions in business – and how can they be “implemented”? As per Laura L. Nash, the author of “Good Intentions Aside: A Manager’s Guide to Resolving Ethical Problems”, “the solution is to adopt a framework that focuses on providing value to others. By making social relationships the top priority in decision making, managers can act on their good intentions without sacrificing strong economic performance.”

After all, “social interest is, in large part, self-interest.” (Albert Ellis)

Following these steps will decontaminate bad intentions and set in place complex empirical thinking that generates the most constructive actions. It will also establish the preconditions for becoming aware of one’s own core values and authentic goals.

Note: If you found this article useful and think others may too, please share the link. If you have a question, comment or want to share your opinion, please share it here or send me a message via LinkedIn.

—- I invite readers to join me on LinkedIn